Update #6: What Everybody Is Doing & All Singleplayer Stretch Goals Reached!

YES! 10 days into our 32 days Kickstarter campaign, we’ve reached all singleplayer stretch goals! Huge thanks, everybody. Next stop: Multiplayer! 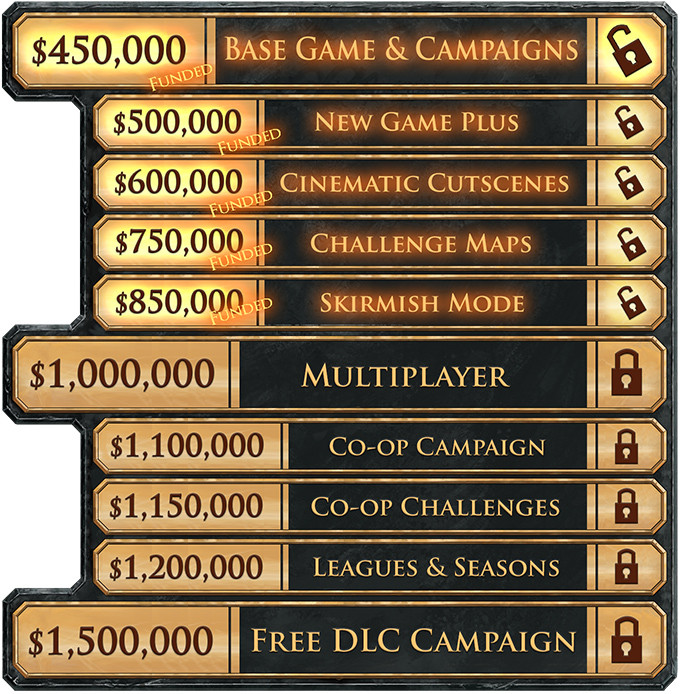 As always: If you want the actual numbers (including PayPal), please check out www.iron-harvest.com.

What Is Everybody Doing?

While the numbers on the Kickstarter keep growing, we thought it would be time to introduce the team a little and to take a look over everybody’s shoulder.

So, everybody… what are you working on?

Jan (Game Director)
I do a lot of talking these days ;-) We talked about how to make the infantry units stand out more visually and how to make not just their faction but also the equipment/role immediately recognizable. We talked about asset production and a lot of technical stuff for level design, we talked about destruction of map-assets and workflows, I talked to external artists about accelerating asset production starting in April and I talked to journalists and podcasts about Iron Harvest and the Kickstarter. The main thing I’m working on when I’m not talking is a detailed project plan up to Alpha 1 this summer.

Julian (Executive Producer)
Driving the Kickstarter 24/7. I try to catch every opportunity to spread the word about the game and stay in touch with the community. From press to Facebook, twitter to YouTube to Discord, I let gamers know that Iron Harvest is the next great RTS ;-) Besides that, Adam and I are working on new music tracks and sound design for the alpha.

Thomas #1 (Technical Director)
I’ve been polishing the behaviour of friendly and opposing units in the gameplay demo you’ve seen in the Kickstarter video. Players empathize with the little people on screen and perceive them as humans, so when they act stupid, blind or deaf, it breaks the immersion quickly. But oftentimes a behaviour that a player expects as obvious and natural is quite hard to define in code. There’s still a long way to go, but we’ve made some important progress this week! 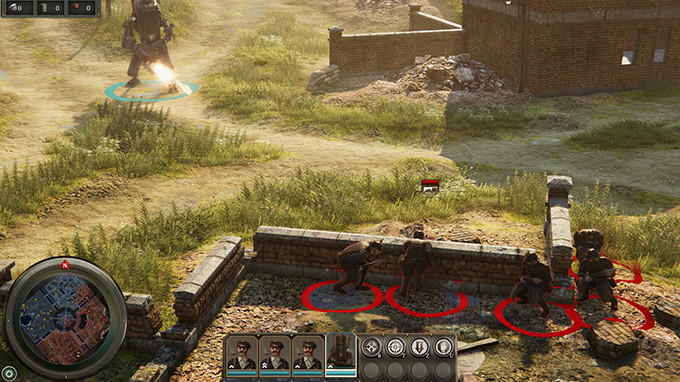 Philipp (Lead Programmer)
I’m going full steam ahead on several issues. I’m making sure everybody knows what to do next and how to do it by listening to game designers, I’m having discussions with other coders, I’m double checking with the art department and I’m nursing the issue tracker. When a new build is out for testing, I can occasionally code a bit. I just did some changes on the scripted behaviour of enemy units and added the “Repair Mech” ability for infantry units. Next up is implementing the new waving flag Thomas did – until a blocking issue is reported by QA or another coder needs feedback on one of his.

Thomas #2 (Programmer)
Started to put map scripting (like spawning buildings/units, sending enemy waves etc.) into xml files so that the scripters can change those things without writing code and rebuilding the game.

Lars (Programmer)
I'm helping Julian, taking care of the Kickstarter campaign by all technical means. For the past few weeks I have been hard at work on our official website and Kickstarter backend to ensure that everyone who wants to support us via PayPal can do so via our shop. After our campaign ends, I'll make sure that everyone gets their pledge contents including Iron Harvest Alpha keys.

Patrick (Programming Intern)
I’m working on a tool that makes it easier for level designers to place walls, fences and the like into the level. They can now basically just draw lines and the system spawns all the required assets.

Stefan (Art Director)
Meetings, meetings, meetings! Besides that, I've mainly been looking into solutions to improve our vegetation system. It will soon be more responsive to Gameplay Events (like grass being bent when walked over, or visibly being burned and bombed away) while also eating less performance than Unity's built-in systems.

Tom (3D Artist)
I just started with the next automachine units. I am doing functioning blockouts, which will then get a simple rig and animations. This is the first step to figure out how a unit plays and works.

I’m currently working on the destruction of the Saxony mech (the one with the huge Gatling gun). We are trying a new system on this guy, where I’m able to blow up specific parts (e.g. arms and legs) to finish him off with an impressive explosion. 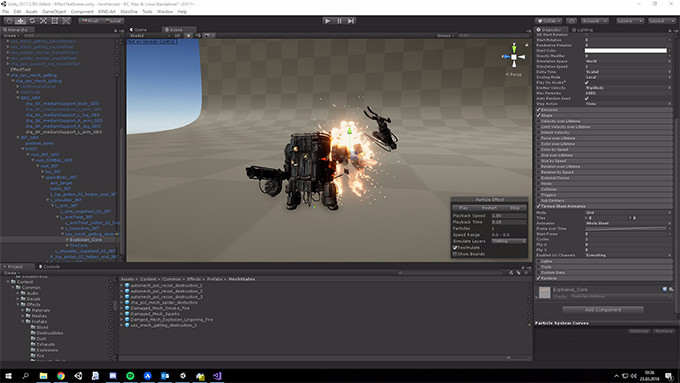 Thomas #3 (Environment Artist)
I’m working on campaign map03 and trying to define what kind of assets are necessary for the “Rural” and “Industrial” graphics sets. The goal is to finish map03 in final quality over the next couple of weeks to have a reference map for these graphics sets.

Daniel (Concept Artist)
I’m working on “resource buildings”: A mine shaft for iron and oil pumps for oil. Instead of just having a flagpole, we’ll have buildings that actually indicate what kind of resource can be found there.

Magnus (Level Design)
I’m working on block-outs for the first seven levels in the game (Polania campaign). At this stage it’s all about gameplay: Size of the map, distances, points of interest, guidance… everything that makes a level “tick”.

Thomas #4 (Lead Animator)
I’m currently expanding our animation pipeline to make sure it’s up and running as we approach main production. Aside from that, I spent most of my time on prototype unit behavior in order to figure out a consistent visual and technical style guide for our animators. 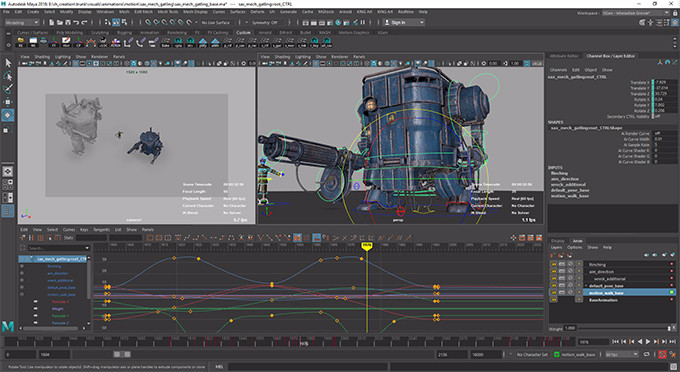 Mailyn (Animator)
I’m working on the basic unit behaviour, ranging all the way from basic infantry to our biggest mechs (to date). Most recently I've equipped our soldiers with hand cannons.

Thomas #5 (Technical Artist)
I’m building a rig for quadrupeds (horses, tigers, wolves), and the last thing I worked on was a better animation for the flag on the flagpoles. Now the flag hangs limp on the pole until it is raised to the top of the pole, where it waves in the wind. This way players get a clear feedback when the flag is raised.

Adam (Composer & Sound Designer)
I’m working on music and sound-design for the Alpha. At this early stage, it’s all about finding the right tone. Ba-DUM-tsss!!

Thorsten (QA / Part-time hand model)
Right now I’m working on establishing QA structures for Iron Harvest. This means finding a way how WE will experience all the bugs, so you don’t have to. It also means looking for good ways to collect as much feedback as possible from you guys (and how to handle it all properly). Hand-modelling:

Dirk (Testing & Research)
I did a lot of testing, checking new features and mechanics in the project. When things do not work as intended, I’m looking for the problem in logfiles. I’m also doing balancing in the Kickstarter demo map and research for new units.

Melanie & Diana (Support)
These two answer dozens of questions each day in the comments and via messages and mails. They try to help anybody who has questions or problems with Kickstarter or on www.iron-harvest.com

Jakub (1920+ Mastermind)
Jakub works on beautiful artworks (like the one below) and works with us on unit- and character designs. At the moment, we try to lock in the 40+ playable units for the three factions. 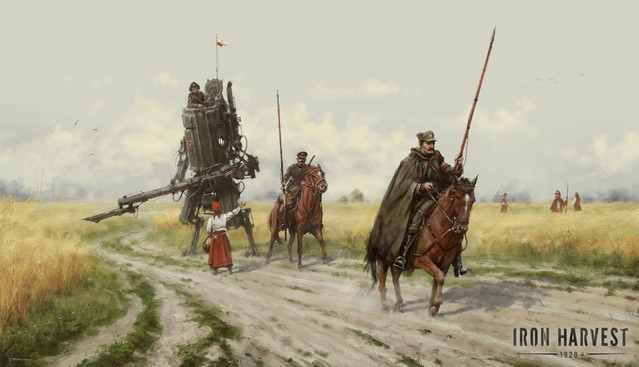