Welcome to the first edition of the Iron Harvest DevBlog! Our goal is to give our backers and people interested in the development of Iron Harvest a behind-the-scenes look, as well as keeping everybody informed about what we are working on.

We‘re going to release one blog post per month. All of them with a similar structure, but with a wide range of topics. Let us know what interests you the most!

If you want to be among the first to know what‘s going on and want even more behind-the-scenes info, be sure to join our private Backers Discord Channel. You can find the link here, if you claimed your copy of Iron Harvest.

If you haven‘t backed/pre-ordered Iron Harvest yet, be sure to join our mailing list to receive a notification as soon as a new DevBlog is available.

In the Gameplay Spotlight, we highlight gameplay features of Iron Harvest. Since we‘re still in development, features might change or even be removed. Feedback is welcome!

Infantry units are the backbone of every army in Iron Harvest. They are cheap, relatively fast and - most important of all - extremely versatile. They fight in squads and can level up two times (veteran, elite). They are the only unit type that can conquer resource buildings/flags and man bunkers.

They are unarmoured units, so keeping them in cover whenever possible - for example in trenches or behind walls - is crucial. Each faction has one standard infantry: 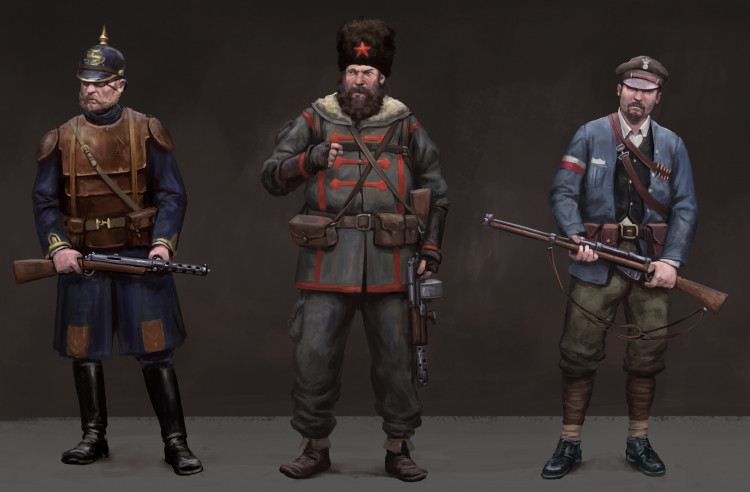 However, the real strength of Infantry in Iron Harvest is its ability to equip different weapons and tools on the fly, in order to be ready for every situation.

Standard infantry is useful in many situations, but its options are limited in others. Doesn‘t matter, if you are equipped with a rifle, a shotgun or an MP... none of those will penetrate a mech‘s armour, help you build fortifications or heal your comrades. You’ll need specialists for that!

Infantry units become specialists by collecting weapons or equipment right off the battlefield. 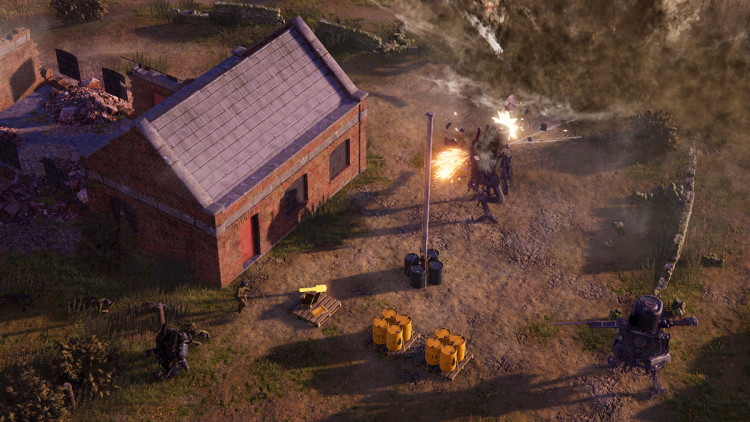 There are seven different classes of Infantry specialists in the game.

Weapon Systems are powerful weapons that need more than one person to operate them, like anti-mech cannons, heavy MGs and mortars. You can build these weapons or find them on the battle field. A whole infantry squad is needed to operate and guard these deadly machines.

When you conquer a weapon system and order a squad to operate it, three men will operate the system, while the rest guards it with their regular weapons. If one of the operators dies, one of the guards takes their place. If there are not enough soldiers left to operate the weapon, the squad abandons it and becomes a regular infantry squad once again.

Weapon systems are very powerful, but also slow. Your soldiers have to push them around and they need time to set them up. All weapon systems have a cone of fire, so direction and placement are important.

The first unit we ever designed for Iron Harvest was the Polania Rifleman. The process was very typical for us: Start with a plan, gather reference material, make artworks, model and texture a 3D model, rig & skin the model for animations (see „Team Spotlight: Animators“) and then animate. 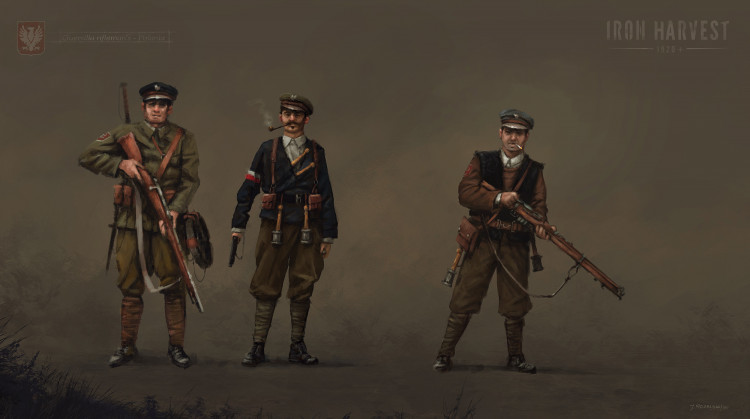 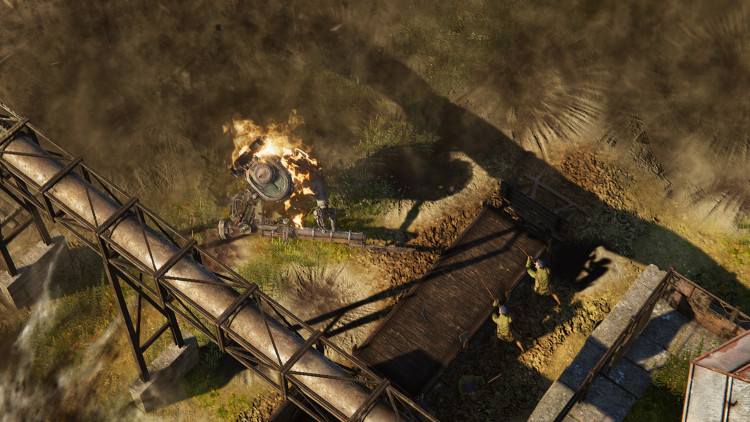 First version of the Polania Riflemen in the game

When everything was said and done, we had the first infantry unit in the game. But there were problems: The unit was hard to see on different terrain, looked too much like a normal soldier instead of a resistance fighter and all in all looked a little bit boring.

So a couple of weeks ago, when we started working on the specialists, we took the opportunity and re-designed the Polania infantry and came up with three basic rules for the design of infantry units: 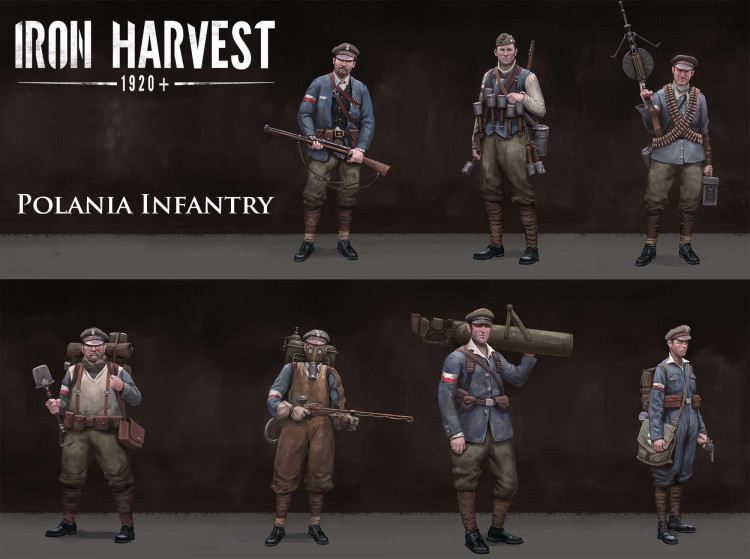 If we did our job right, you‘ll recognize the faction and the class of an infantry unit at once. Very important when dozens of them are running around on the battlefield. Making them „run around“ is the job of our animators. We talked to Thomas, our lead-animator, in this month‘s Team Spotlight!

In the Team Spotlight section we‘re highlighting the work of one of our departments to give you guys a broad overview of who is working on the game and what they are doing.

Animators take 3D models and make them perform actions, using a variety of techniques. The job is challenging on both an artistic and a technological side. We asked the Iron Harvest Lead Animator Thomas Derksen a few questions.

Q: What are your fields of work when it comes to animating Iron Harvest?

A: There are two big areas: Ingame animations and cutscenes. Cutscene animations are very smilar to CGI film animations. We animate scene of maybe one or two minutes, including camera, facial animations, lip-sync and so on.

Ingame animations are usually short animations or little chunks of big actions that a being stitched together in real-time by the engine. For example, shooting over a cover, getting up, throwing a grenade and running into the next cover might be an action that consists of maybe 10 little animations. That’s necessary so that units can react fast and flexibly to “stuff” going on around them and to player input.

This “stuff” requires a lot of back and forth between animators, programmers and effects guys. When it comes to ingame animations, a big part of my job is to figure out, together with the programmers, how to implement ideas and make animations work without players noticing the tricks we have to use, because of technical and time limitations.

Q: Around 30 units in the game are mechs or exo-skeletons. Are there special challenges when it comes to mechanical units?

A: The biggest challenge when it comes to mechs is that they not only have to look cool, they also have to work from a mechanics standpoint. Nobody wants a cool looking mech that isn’t able to move fast enough, because its legs do not function properly without clipping through armour or stretching metal with every step. We want them to be as flexible as possible in their movements, but at the same time, they are much more constrained by mechanics and materials than a squishy humanoid or animal.

To achieve that, we build rough block-out version of all the mechs and give them some basic animations to test things like max movement speed, turn radius and so on. We adjust this block-out version until the art department and the animation department are happy with the result, and only then we start with paint-overs and the final 3d model.

Blocked-out version of a Polania mech

Q: Beside mech mechanics, what are the biggest challenges to animating mechs in Iron Harvest?

A: There is no good reference material. When you animate an animal, you check out the real animal on YouTube or something. When you animate people, you do the movements yourself or you film a colleague. With 10 meters high, 20 ton diesel-punk mechs, our options are limited. We get some clues by looking at animal behaviours, but a lot of it is trial and error.

Another challenge is the fact that the camera is relatively far away and high up. We want to show clearly what’s going on, giving the players hints what a unit is about to do next, but because of the perspective and distance, we can’t use subtle movements or details.

Another artistic challenge is to find the right balance between weight and responsiveness. We want the mechs to feel big, powerful and heavy but at the same time they can’t be too slow and they must react to player input immediately.

Q: How many ingame animations will be in the game?

A: I can’t tell you a specific amount, but there will be A LOT. The basic infantry has 110 animations at the moment and this will only grow, because we’re adding stuff like vaulting over obstacles and sliding down into trenches.

We have different walk/run speeds, stances, idle animations and tons of transitions between all that stuff… We are going all-in when it comes to animations, because it’s one of the areas where we see room for improvement. We also want the game to be fun to look at. 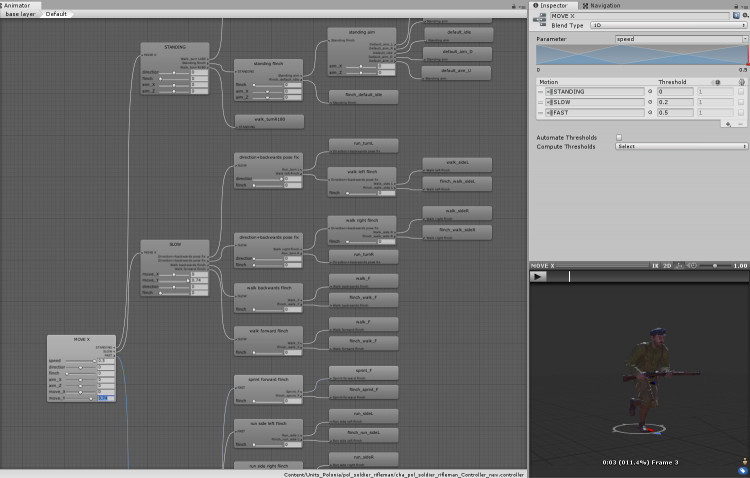 Q: What are your plans for the cinematic cutscenes?

A: We want to tell an epic story. There will be over 20 cutscenes between missions, all in all close to an hour of animations. That’s a huge amount of work.

To make it feasible, we won’t be using rendered CGI animations, but instead captured in-engine animations. For that, all heroes, mechs and other units are being designed in two quality settings. One for the cutscenes and one for ingame. The cutscene versions have hundreds of thousands of polygons, advanced cloth and hair simulations and stuff like that, which you can’t do ingame with a hundred units on screen.

We’ll use motion-capture for humanoid units, but of course a lot of stuff has to be animated by hand, because it turns out it’s too hard to get tigers, wolfs or mechs into MoCap suits.

Q: What are you looking forward to the most?

A: I’m really excited to do a lot of stuff that hasn’t been done for RTS games up to this point. Gameplay is always more important than presentation, but our goal is to be the RTS with the best animations out there. 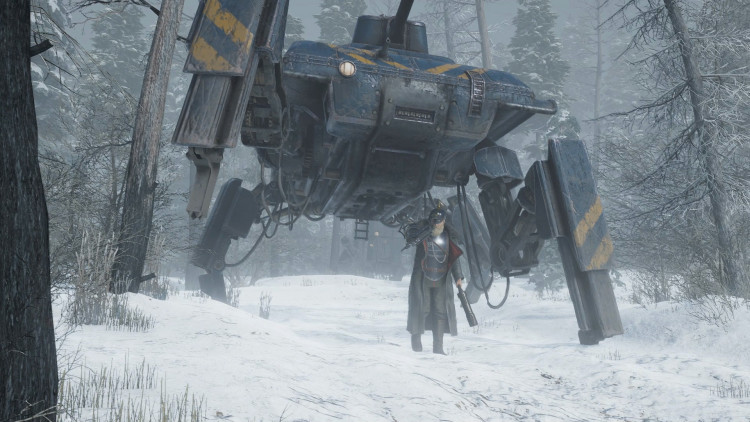 In April we were busy with the aftermath of the Kickstarter and ramping up the production. We hired external artists to help with the asset production, we organized the feedback we received for the Kickstarter demo and started working on fixing issues and improving the overall feel and gameplay. At the same time, we started re-working some big systems like the avoidance- and cover-systems that kind of worked in the demo, but were never implemented properly.

Alpha 1 is scheduled for release in early August.

This was our first monthly DevBlog! Let us know what you think and leave your suggestions on how to improve it in the comments.