It's August and as promised, we just released the Iron Harvest Alpha 1. Everybody who supported us via Kickstarter or our shop with $55 or more will receive an e-mail today with info on how to get it. Please see “How to get Alpha 1” below for details.

Alpha 1 features one challenge map and one skirmish map (both singleplayer). Our goal has always been to make the game available to players as early as possible in order to garner feedback. We have now reached a state where you can give constructive feedback about the UI, the controls, basic gameplay and the look & feel, and we are very much looking forward to it.

Check out “What’s in Alpha 1, what isn’t?” to learn more about what to expect from the current version and what is still on our “To Do” List.

Showing a game so early in development is a little nerve-wracking for us as developers. Usually, you polish the crap out of the first screenshots and videos of your game, because you want to make the best impression possible.

However, we decided to let the community be part of the development process, which means we go all the way:

You can produce and release any videos, screenshots and articles about the Iron Harvest Alpha 1 that you like.

We only ask you for three things:

If you want to be among the first to know what‘s going on and want even more behind-the-scenes info, be sure to join our private Backers’ Discord Channel.
Gameplay Spotlight: What's in Alpha 1, what isn't?

In our Gameplay Spotlights, we go into more detail about gameplay features of Iron Harvest. However, please note that since we are still in development, features might obviously change or could even be removed from the game entirely. Your feedback and thoughts are very welcome, as always!

Alpha 1 is a small slice of content and gameplay of what Iron Harvest has to offer. Our approach was to deliver an already somewhat polished experience of some features, instead of cramming as much stuff as possible into Alpha 1.

This is what's in Alpha 1 and what it isn't:

You may have already seen this challenge map, called “The Last Stand”. This is a revised version of the Kickstarter demo map. It's about defending your base from a total of 10 waves of enemy attacks.

To achieve this, you have to collect resources and equipment on the map. It’s all about coordinating offense and defence. Expect to die a lot before winning this mission for the first time. You’ll get better with each try and eventually, you’ll be able to survive all the waves. 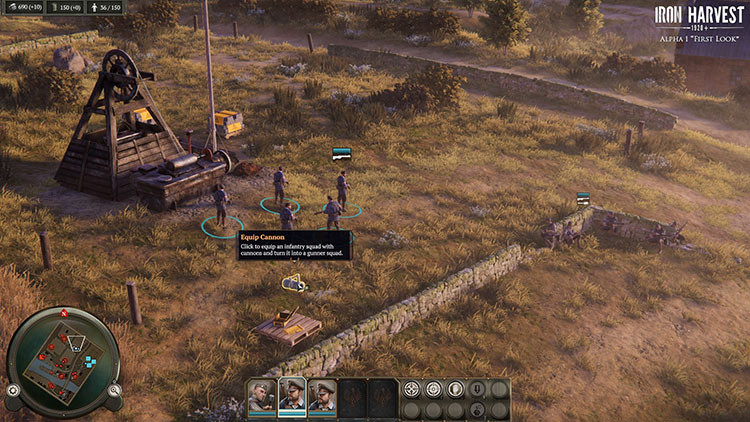 It is very important to have the right tools to defend yourself from the attackers. You can build different units in your base and you can find equipment for your infantry on the map to make them stronger.

The second map is a Skirmish map. You play against the first iteration of our A.I. on a relatively small map.

This time, it's all about collecting Victory Points. You earn Victory Points by conquering and holding strategic positions. There are also several resource buildings on the map that supply you with iron and oil when you conquer them. It is very important not to fall behind economically. Barricading yourself in your base and leaving the map to your opponent is a recipe for disaster. 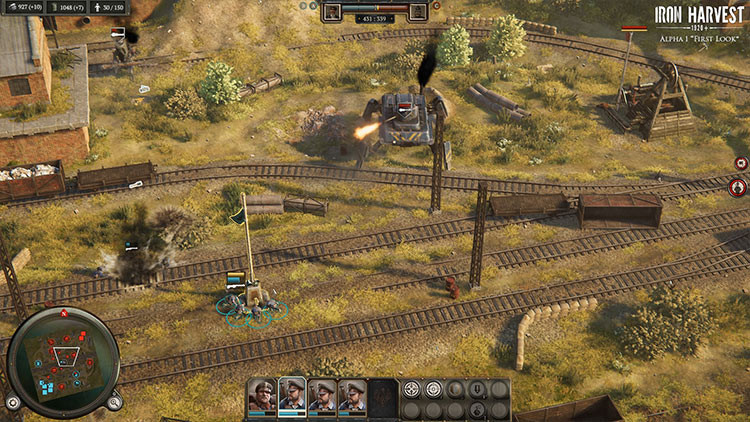 Infantry units can conquer flags and buildings. Resource buildings provide ongoing resources as long as they belong to you. Strategic positions give you one time Victory Points when you conquer them and then deliver Victory Points as long as you hold them.

For both types of matches, challenges and skirmishes, you can define “Bonus Goals”. These modifiers that make it harder for you to win in exchange for more XP. At the moment, you really can’t do a lot with XP. Later on however, XP will be important to level up and unlock things. 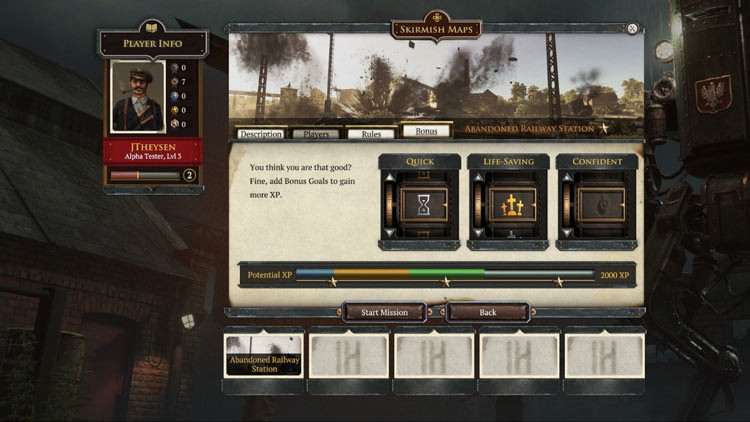 You can try to earn three “Stars” in each map. In order to get three stars, you not only need to win, but also win with a couple of modifiers in place.

A lot of stuff is already in the game:

Other features that are still missing:

We like the basic setup, but we’ll probably do a lot of adjustments and add features based on your feedback. UI & Controls is one of the most important things to get right in an RTS, so expect us to keep working on it continuously until release and beyond. Gamepad controls are not part of Alpha 1.

Obviously, there is a ton of content still missing. This Alpha is not about the amount of stuff still missing, but about the quality of assets that are in the game. The unit graphics are pretty much final, except for decals and personalization. There is still room for improvement when it comes to level graphics, effects and overall visual quality. Some sounds are fine, others could be better. 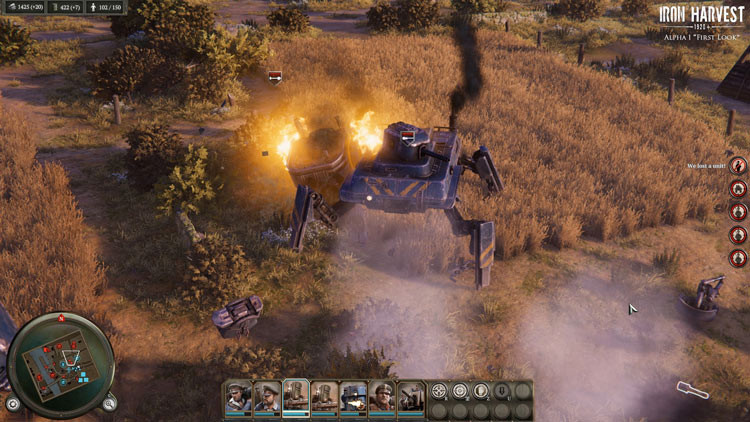 We’re going to add some additional animations for units in Alpha 2, for example, a vaulting animation for infantry units and a “jump into trenches” animation. There are also a few ability animations still missing, but overall, we’re happy with the animations we have – now it’s all about doing it for dozens of units more.

There is some basic balancing, but since many units and gameplay features are still missing, there is no point in investing too much time and energy in fine-tuning the balancing for Alpha 1 units. Therefore, please don’t expect a perfectly balanced experience. 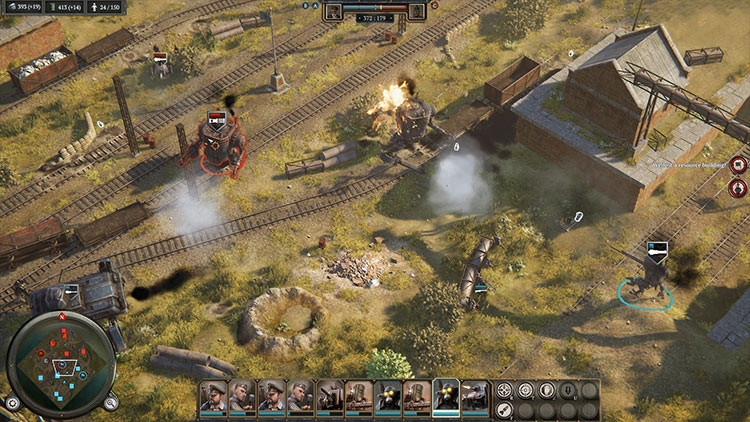 In the Alpha 1 demo, you can only play some of the Polania units, some Saxony units, and no Rusviet units. Since there are so few units, you can play ALL units for now, no matter which faction you play. Obviously, there is no campaign and no multiplayer yet and only two maps… it’s the first Alpha after all ;-)

It's still a very early version of the A.I., with only a few months of work put into it so far. It’s safe to assume that it’s making mistakes and you will be able to find ways to trick it. Nevertheless, the A.I. isn't too bad at the higher difficulty levels - even though it doesn't cheat (the same rules apply to it as they do to you).

Based on your feedback, we’ll keep improving the maps that are in Alpha 1. We want both maps to be part of the final game, so we’re going to iterate on them for many months.

We’ve put some time into basic graphics performance optimization, but for most systems, the CPU performance will be the bottleneck. We did no optimizations yet and most of the game still runs on one thread on only one processor. Expect major improvements in this area. 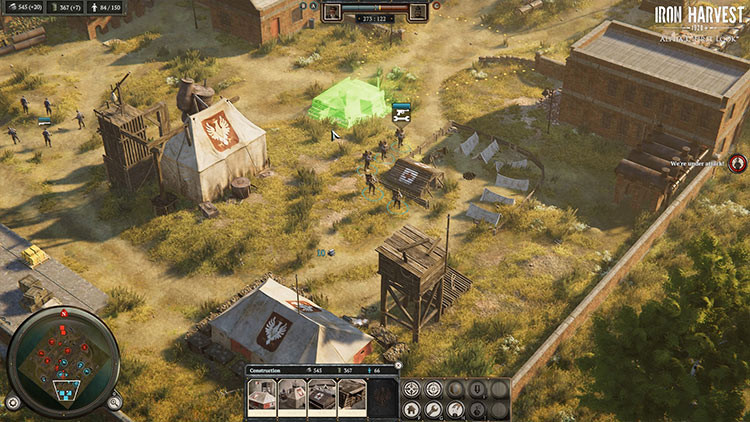 We’re proud of what we’ve achieved so far, but we’re also aware that we have a long way ahead of us. We’re looking forward to your feedback, because in the end, we’re doing all of this for you. Please let us know what you think and help us to make Iron Harvest the best game it can be!

Info: How to get Alpha 1

We’re excited to get the game into players’ hands for the first time! We want your feedback in order to improve the experience constantly over the next year and a half.

Here is how you can get Alpha 1!

If you are an Iron Harvest Kickstarter backer ($55 tier or above) and you already have an account for the KING Art portal, go to https://kingart-games.com, log in and claim your Steam key in „My Library“.

If you are an Iron Harvest Kickstarter backer ($55 tier or above) but you don’t have an account at the KING Art portal yet:You will receive an e-mail from us today explaining what to do.

If you bought / backed the smallest Iron Harvest edition (the edition that features only Beta access but no Alpha access) and you want to upgrade, go to https://kingart-games.com/, log in and click on “Upgrade Edition”.

If you haven't bought Iron Harvest yet, go to www.iron-harvest.com and pre-order one of the editions that offer Alpha access.

We’re going to update Alpha 1 once or twice, but in general, our focus will switch to improving the game based on your feedback and working on Alpha 2. Alpha 2 is scheduled for December and will be the “Multiplayer Alpha”. Alpha 1 will remain playable for backers up until then.

The idea is to incorporate multiplayer modes so you guys can start playing against each other. That’s very handy when it comes to balancing the game. At the same time, we’ll improve the existing single-player modes and add new maps and especially a ton of units. If everything goes according to plan, Alpha 2 might feature all Polania and Saxony units, except heroes.